Subscribe To Our News
By Freedom Caucus
Monday, August 29, 2022 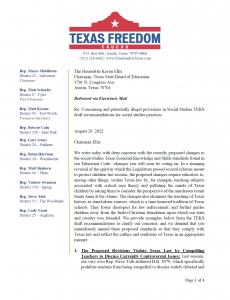 Recently the SBOE began circulating draft changes to the Texas Essential Knowledge and Skills social studies standards that will be used to educate public school children across Texas. The proposed changes are unacceptable and in many cases illegal. Among other things, the changes require educators to teach:

The proposed standards also eliminate Texas history as a standalone course, in favor of intertwining Texas history with other historical subjects, in effect watering down our heritage and putting it on the same level as all other cultures. This is unacceptable—Texas is exceptional, and that should be reflected in our public education system.

We are watching these changes closely and will not hesitate to intervene during the next legislative session, should the need arise, to protect Texas children from being further indoctrinated and taken advantage of. We sent a letter to the SBOE demanding the proposed changes be substantially amended before further action is taken, and you can read that letter by clicking here.

We won't let this happen in Texas! Thank you for your continued support.